Ever wondered why mobile phones need to have SIM cards?

SIM stands for Subscriber Identity Module and serves as your unique mobile identity that connects your mobile phone to a network. Making calls, sending texts, or signing up for a social media application, a SIM card is a necessary part not just for mobile phones but for many parts of our lives. Although mobile phones can work without a SIM card inserted, by accessing the WiFi networks, having a mobile phone number is an essential way of communicating with the world, through your smartphone.

If you are a business owner or just someone who likes to chat with different people a lot of the time, having a phone number is essential. Communication is more than just through a mobile phone. With all the online communication tools, having an internet connected phone is a gateway to the world. Especially if it includes more than just one number.

Why do people need two phone numbers? The answer is simple, for busy people, having a separate phone number serves as a protection of their privacy. Of course, there are more reasons why having another SIM card is beneficial and we will discuss that as you scroll down.

Since we’re talking about SIM cards, did you know that EE (formerly Everything Everywhere) and a part of BT telecom group is the United Kingdom’s number one network provider for 7 years in a row now? Their example for providing consumers with 5G connectivity made them receive the number one spot as a network for such exemplary service. In fact, the UK carrier EE has announced its switching to 5G technology in 12 new cities and towns across the country and among the areas covered by the 5G service are Aberdeen, Aldershot, Barrhead, Blackpool, Castleford, Crawley, Mirfield, Oxford, Porthcawl, Shipley, Stafford and Warwick and the surrounding areas.

The launching of the first 5G service was introduced in 2019 and ever since, EE have expanded to 112 towns and cities across the UK. In the previous 12 months, EE has also successfully doubled its number of 5G sites in key cities such as Belfast, Birmingham, Cardiff and Edinburgh. The initial launch of EE 5G technology was made in London, Edinburgh, Belfast, Cardiff, Birmingham and Manchester.

Some other large cities which the telco offers 5G coverage include Bristol, Covently,  Hull, Leeds, Leicester, Liverpool, Newcastle, Nottingham, Sheffield and Sunderland.The 5G service is among the many advantages of the carrier and a primary reason why people choose them as a network service provider. 5G wireless technology is built to deliver higher multi-Gbps peak data speeds, ultra low latency, more reliability, maximized network capacity, increased availability, with better quality and an easier user experience for a wider audience.

Given EE’s presence and value over the last seven years in the market, the growth of the network has established a successful brand. In 2018, there were 29.56 million mobile accounts that subscribed to EE. They have many different plans suitable for different customers offering niche services through to mainstream features that can benefit the majority of mobile users. One of their flagship offerings is their roaming plan.

The telco’s roaming scheme can be classified into two parts, depending on what plan you opt to sign up for. It has a cheap essential plan and a premium max plan where customers can pick and choose the features that they want and can assign usage rates to different features. This allows for some very customisable plans, fit to suit individuals and businesses alike.

EE Essential plan includes the ability to use your UK monthly allowances in the European Union (EU) while not being charged for anything extra. The EE Max plan enables customers to roam for free in EU locations too and even use their allowance further afield.

Check the roaming destinations that are included in the EE Essential plan:

For EE Max plan subscribers, they are also covered on the areas mentioned above but only them gets access to the following destinations where they can still use their UK allowances:

For many reasons, EE is considered a premium telco provider, offering such amazing deals and features to their corporate and consumer customers.

One of the drawbacks is that EE, BT Mobile, Tesco Mobile and Vodafone all sell their phones locked to their networks. Meaning, buyers are not allowed to insert another network provider’s SIM card without requesting for it to be unlocked. Given that, many people find a locked-in to one network mobile phone an inconvenience especially if they would be opting to change carriers due to disappointment, or because another carrier has brought out some better features.  If you are moving house one of the first things to check is mobile coverage near your home, and if your current carrier has insufficient coverage, and a weak signal, there could be problems ahead.

Currently, EE pay as you go deals include iPhone, Samsung, OPPO, IMO, Sony, Nokia, Huawei, LG, Alcatel, and Doro. As we reiterate the benefit of having a work-life balance; when it comes to handling privacy through mobile phone numbers, having a Dual SIM phone would be a variable solution. Maximizing the service offered by EE is best for business and customers since its services are of the highest quality as a carrier.

Unfortunately, EE Dual SIMs are only available on selected phones but since they are locked on their network, you need to connect the network directly to your device even if it is a Dual SIM. All phones purchased from EE either pay as you go or pay monthly are locked to their network but once your device reaches its 18 month contract with EE, it will be automatically

unlocked for other networks. After the UK regulatory body discussions and consultations to ban locked phones; effective in December 2021, Ofcom has announced that

mobile phone resellers will be banned from selling locked phones in the country.

This service is aimed at maximizing the use of mobile phones since they will have the freedom to choose two different plans depending on their requirements. Partnering with the trusted 5G provider, it is obviously a great deal anyone could be enticed to grab.

So what can you get by having EE as your service provider for a Dual SIM? First, two SIMs will be available at any time – so you can make and take calls, and send and receive texts using the dual SIM on the one phone. You can switch between SIMs to connect to your different dual SIM data allowances. You get two numbers in one device so there’s no need to carry two phones around with you. Customers can also control and track business and personal charges in one place, with a single bill from EE. Finally, customers can get connected to both SIMs to the best network in the UK for seven years running.

Other extras from EE:

Another benefit from being an EE subscriber are the perks that come with the plan like:

If you are interested in subscribing to EE, they have a UK based support team and their customer support is open from 8AM to 8PM from Monday-Friday and 8AM to 6PM during weekends.Likewise, if you have an EE phone you can reach them on 150 or on 07953 966 250 from using any different phone.

Do they charge phone calls made to customer service?

Calls from EE phones are free, but calls from any other phone are charged at standard network rates.

Are there any other options to reach EE without calling?

Yes, EE customers can also get in touch with customer support on live chat via EE website.

Is EE the best deal for telco? We cannot deny that their service is among the best however if you want to find other options to compare price plans and services to, we would recommend  another challenger telco. ConXHub, founded by Mark Trowbridge is a highly advanced, competitive, and innovative business phone system that allows its users to get unlimited local and international numbers just by using one mobile phone.

Yes. While we value the contributions of Dual SIM mobile phones to the ease and comfort of people dependent on the use of mobile phones for communication. ConXHub challenged the motivation behind Dual SIMs by providing its subscribers even more than what competitors can offer in a price and quality-wise offer. Dual sim means 2 numbers. ConxHub means over 1,000 numbers on one phone.

The advantage of having a different phone number on your personal mobile for business is a huge help.

But what if we tell you that you could already have an additional phone number on your personal mobile even if it is not Dual SIM ready.

Moreover, what if you could have as many phone numbers as you need in one device? Whatever the reason may be, you can have over 1,000 different phone numbers on any one mobile phone, each independently labeled so you can easily identify which one to use.

Save the need to get two plans from the same carrier if your phone is locked or from a different carrier for the sake of using Dual SIM. If you want a second phone number on your mobile, check out these additional benefits offered by ConXhub. 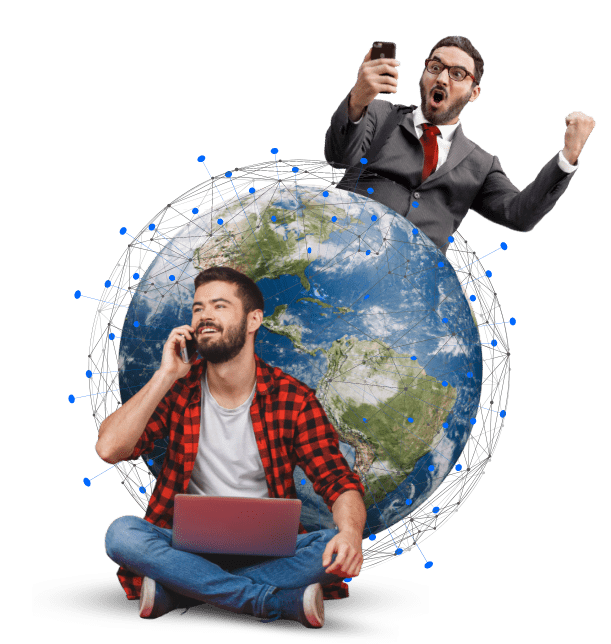